CCBA is mentored by Harvard and MIT educated Prof.Christopher Benninger, a ‘Great Master Architect’ award recipient, founder of the School of Planning at Ahmedabad (CEPT University) and the Center for Development Studies and Activities (CDSA) at Pune. He has worked on Urban plans, rural and regional plans along with low cost mass housing projects in India, Indonesia, Malaysia, Bhutan, Sri Lanka, Nepal and America. He advised as a consultant on Urbanism to the UNO, World Bank and ADB. As principal of the firm Christopher Charles Benninger has been a registered architect with the Council of Architecture since 1976; a Fellow of the Indian Institute of Architects a Fellow of the Institute of Town Planners, a Member of the American Institute of Architects, a Member of the American Planning Association.

CCBA as a Brand name for several decades is an Indian Multi disciplinary design company with primary focus on Architecture, Design and Planning. CCBA gained momentum with its award winning project Mahindra United world College of India way back in 1999 that won accolades across the World. It was named as the top 10 Super Structures in 2000 by Business Week and American Institute of Architects, Washington, USA. It was the top 20 finalist of Aga Khan Awards in Geneva, Switzerland and World Architecture Awards in Berlin, Germany. Construction World Magazine has conferred ‘TOP 10 Architects of India’ award several times. The designs of the studio have been published about 300 times in most of the national and international magazines and architectural journals, such as Ekistics (Greece), Spazio-e-Societe (Italy), AIArchitect (USA), Cities (UK), Architectural Record (USA), ZOO (UK), Business Week (USA), Architects’ Newspaper (USA), Arquitectura Viva (Spain), World Architecture (UK), MIMAR (UK), Habitat International (UK), Architecture+Design, Indian Architect and Builder, Inside-Outside (India) and many others. This propelled the firm to be chosen as the most sort after firm for any institutional project in India, as it set an example that institutional architecture doesn’t have to be regimental in design, perhaps, still under the influence of colonial philosophy of learning as seen in many of the schools, colleges or centres of higher learning.

The firm started as a small proprietorship design firm in 1995 by the Company Founder Chairman and Principal Architect Prof. Christopher Benninger along with Founder Managing Director Mr. Ramprasad Akkisetti. With the changing economic liberalization, and part of the expansion plan, Benninger Technical Services came into being in 1999 that eventually morphed into Christopher Charles Benninger Architects Private Limited (shortened to be addressed as CCBA) in 2000. CCBA is an Incorporated Company registered in 1999 under the Companies act 1956. Engineer Rahul Sathe joined the company in 1996 and is a share holder and a Director of the company managing issues regarding Finances, Contracts, Projects related issues. Architect Daraius Choksi joined the company in 1999, is a share holder and a Director of the company overseeing all aspects of architectural design studio of the company. Ar. Shivaji Karekar and Deepak Kaw are Senior Associates who have been with the design studio since 2001 and have successfully completed several award winning projects of the firm leading several architects on the process of design and drawings. Small teams mentored by senior architects, such as Noel Jerald V and Bhushan Pise, Gaurav Inamdar, Sundar Bommazee, Rahul Deshmukh develop projects in the studio. CCBA Designs Pvt. Ltd incorporated in 2016 under the companies act 2013 is a wholly owned subsidiary of CCBA Pvt. Ltd, shortened its name in 2016. CCBA also operated under the name Benninger Techtonics USA registered in Florida, USA briefly to operate its projects of overseas and United Nations.

CCBA LOGO is inspired from the idea of yin and yang or the merger of the indoors and the outdoors. The idea generated from the Library building of the Mahindra United World College of India in Pune. The design of the building takes the outdoor garden inside the library making it a unique idea of bringing nature into the building. This has been a very important aspect and turning point in the design philosophy of CCBA, where there has always been a deliberate attempt to bring nature into the building. This curvilinear C finds its way into the design of the font C, B and A mimic each other. For an onlooker all the alphabets of the logo CCBA are perceived as similar. The logo alphabets in white representing purity or honesty is enclosed in a simple solid square of Indigo Blue reflecting its rootedness to India and blue as such is associated with its functioning as a corporate entity. This unique logo has been imitated by many business houses including some of the famous apparel houses, while it keeps inspiring many new companies to borrow an idea or two from it. 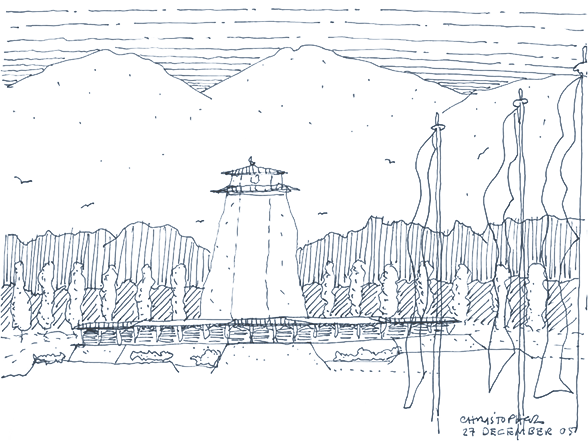